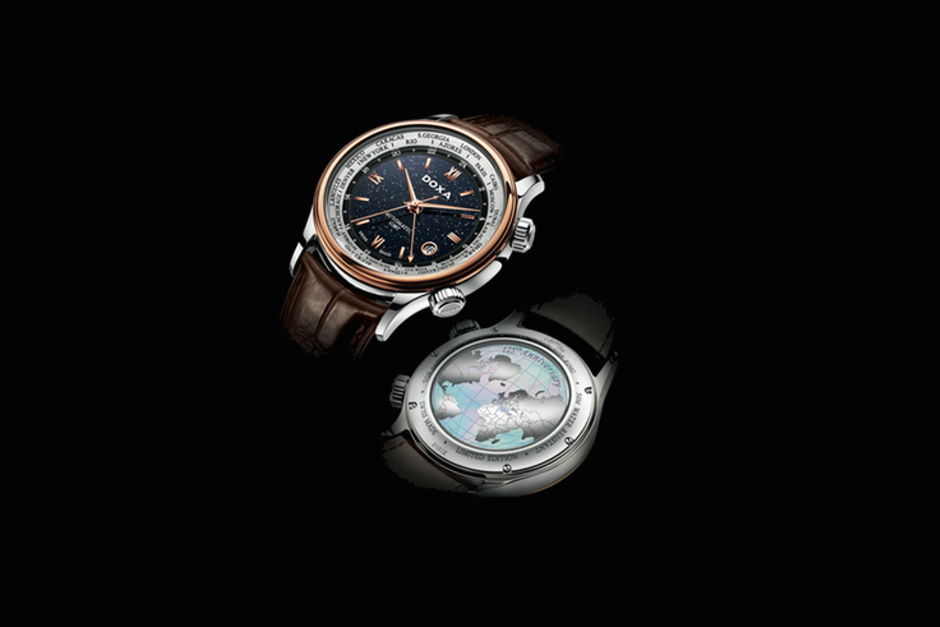 There are few more apt names for a world timer watch than ‘Doxa Blue Planet’. After all, Earth – our planet is commonly referred to as the Blue Planet. On top of that, this model, which hails from the GrandeMetre collection is made in celebration of Doxa’s 125th anniversary.

Doxa is a Swiss made brand, whose name means glory. The Doxa Blue Planet is offered in three versions – a stainless steel edition, and two bimetal versions (one with 18kt yellow gold, and the other in 18kt rose gold). These models are limited to 300 pieces each.

The cases are all fitted with brown alligator leather straps with classic ardillon buckles for security. These watches are sized to 42mm (not inclusive of the two prominent crowns at the 2 and 4 positions). The crown at the 4 position is responsible for adjustments to the time and date, while the crown at 2 o’clock is used to control the rotating the internal bezel with the names of 24 cities representing the 29 time zones. The case back on the Blue Planet features an engraving depicting the earth with lines of longitude and latitude. The water resistance on this timepiece stands at 50 meters or 5 ATM.

The dial is quite interesting with Aventurine crystals, which are clear crystals from the quartz group of minerals. The crystals are dotted on the dark blue dial, making it reminiscent of a starry night. The hands and hour markers, either gold toned or rhodium toned, stand out well against the dial – offering optimal legibility. At the 4 position is a circular date aperture. Just below the rotating flange is a fixed scale with Arabic numerals up to 24 that is used to indicate the second time zone or GMT function.

This 125th anniversary watch – the Blue planet is fitted with a self-winding mechanical movement.