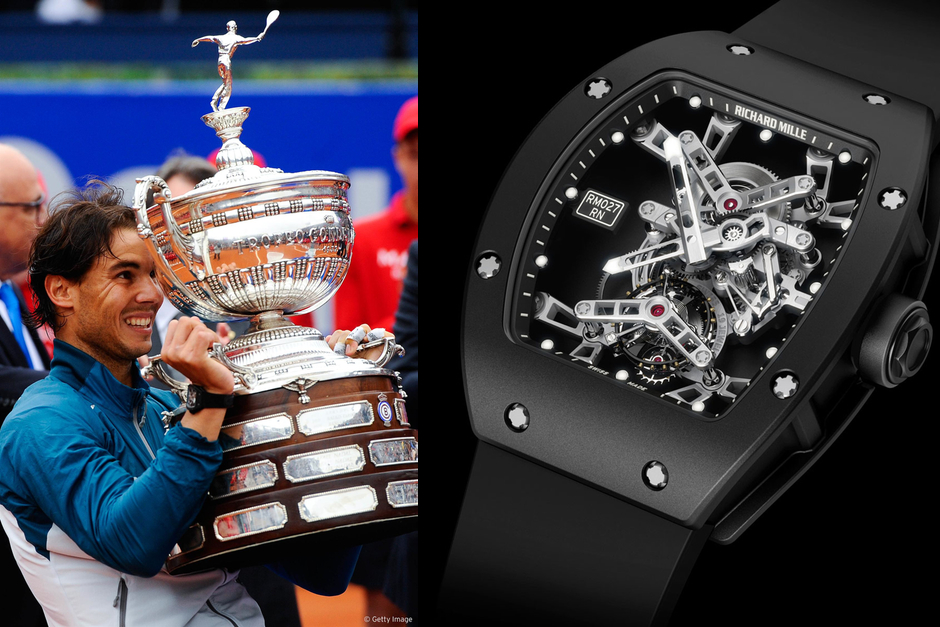 If you are ever fortunate enough to hold the Richard Mille RM 027 Rafael Nadal, you’d be amazed as to just how light this timepiece is. I say fortunate enough because there were only 50 made in the world. As you might expect, this is the watch that Nadal wears to all of the Grand Slam tournaments held each year. Richard Mille donated the prototype for this watch to be auctioned off a couple years ago.

The sheer lightness of this watch is attained using titanium made black using a DLC coating. The watch, in total, weighs an astonishing 20 grams. The size of the case is 48mm top to bottom and 40mm across is large, which can make the lack of weight for this watch a bit unsettling at first. To put this into perspective, the Richard Mille RM 027 Rafael Nadal floats on water.

As with most other Richard Mille creations, the RM 027 features a tonneau shaped case design with unique, polished stainless steel screws around the ample bezel. The timepiece is fitted on a smooth, luxurious black rubber strap. The Richard Mille RM 027 is water resistant to 50 meters.

The movement is visible though the exhibition case back and through the dial making this timepiece a bona fide skeleton watch.  The hand wound movement features a tourbillon at the 6 position, which regulate the time by negating the effects of gravity on the escapement.

Richard Mille doesn’t overly decorate the movement but leaves it as class in simplicity. The hands on this model are rhodium toned and skeletonized as well. On the flange is a minute scale and is printed “Richard Mille” at the 12 position. At the 9 position, there is a sign reading “RM027” and “Nadal”.The Richard Mille RM 027 Rafael Nadal is definitely one of the most sought after pieces in horology today.