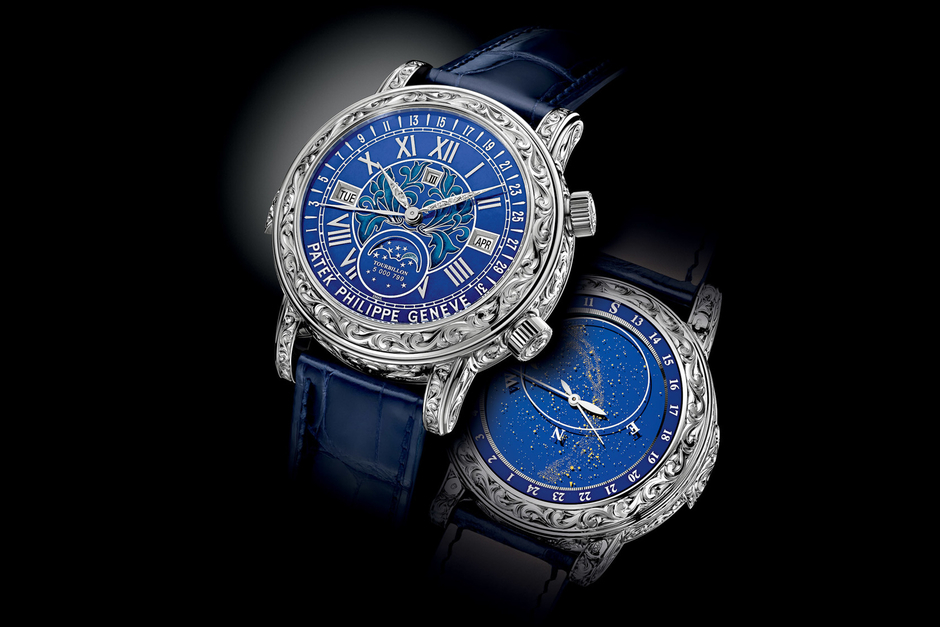 Patek Philippe shows us irrefutably once again why they are considered the best in the world with the Sky Moon Tourbillon 6002G. When I first saw this watch a couple months ago, I was awestruck by the level of detail that was inferred on the case and two dials. This isn’t the first watch out there to have the case hand engraved but it is the by far the most ornate and perhaps time consuming.

Before I get ahead of myself, the Patek Philippe Sky Moon Tourbillon 6002G is a Grande Complication timepiece featuring some 13 different functions just like its predecessor – the 5002. However, instead of just re-casing the model, Patek makes some changes to the display such as the introduction of apertures for the day, month, and leap year indicator. Apart from that, the two models offer the same retrograde date indication, minute repeater with cathedral style gongs, a tourbillon, and a moon phase. On the rear dial is a host of astronomical complications like the sidereal time (mean solar time), and the angular progression and the phases of the moon all set on the northern hemisphere sky. If this sounds like a lot, remember that the 6002G is a new take on the world’s most complicated watch.

Patek refers to the Sky Moon Tourbillon 6002G as ‘a sculpture for the wrist’ and without a doubt this Swiss brand is wholly justified in that assertion. The case is crafted from a single block of 18kt white gold entirely by hand. The ornate designs in arabesque structures are done in relief, while the curved Calatrava crosses are done using chip removal techniques. Any mistakes made by the engravers result in the case remelted and the whole process starting from scratch. Once the over 100 hours of detail intensive labor is complete then the case is examined by master artisan and president of Patek Philippe – Thierry Stern. There are two crowns on this model at the 2 and 4 positions. The crown at 4 is responsible for setting the front dial and for winding the watch, whereas the crown at 2 is used to set the sidereal time on the reverse dial.

The dial is also very detail oriented using two distinct types of enameling techniques to achieve perfection on the dial. These techniques are Cloisonné, and Champlevé, used together to forge the dial on this masterpiece. The Patek Philippe 6002G uses a white gold dial base and gold appliques for the hour markers and retrograde date display.

The official name of the caliber is the R TO 27 QR SID LU CL. With the amount of complications that it features it is truly a wonder that it only measures 12.61mm for its thickness. As expected, the Patek 6002G’s movement is comprised of numerous parts – totaling 705 to be exact. This model features an autonomy of 48 hours. The Gyromax® balance wheel beats at a constant 21,600 VpH or 3 Hz. The Patek Philippe Sky Moon Tourbillon 6002G carries the coveted Patek Philippe Seal.