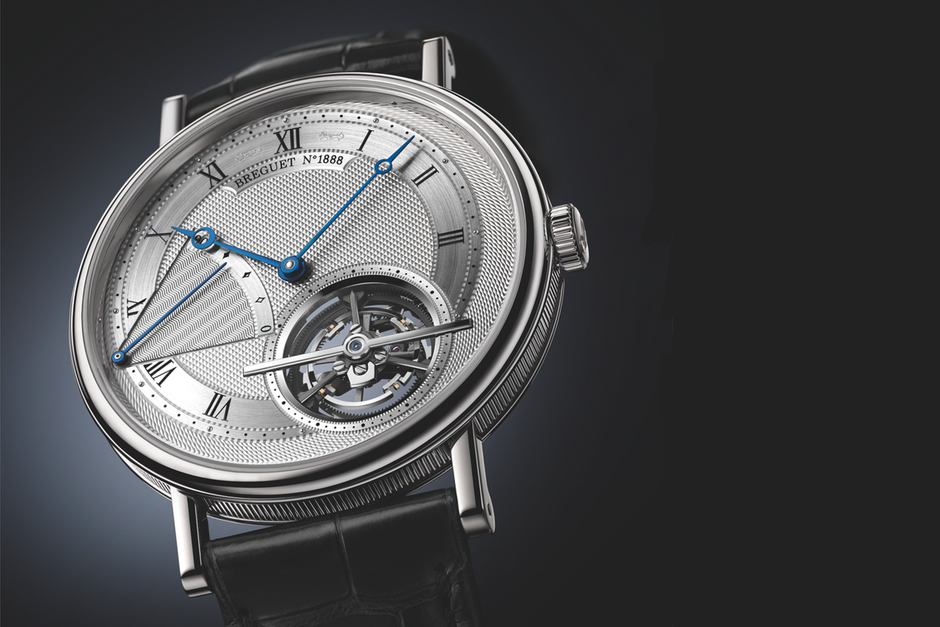 Earlier in 2014, Breguet announced its new Classique Tourbillon Extra-Plat model, which returns this year in its platinum rendition. The word Extra-Plat means “extremely flat,” and it refers to the brand’s attempt to create an extremely complex movement that is only 3mm thick. The Tourbillon Extra-Plat Automatique 5377 is regarded as the world’s thinnest automatic tourbillon, which uses an open barrel construction with ball bearings, instead of a traditional bridge, to save a great deal of space and provide extra energy for powering its functions. The bi-directional platinum winding rotor is placed on the outside edge of the movement, which makes it possible to embed it in a case that is only 7mm thick.

The off-center tourbillon, which counteracts the effects of gravity and demonstrates the watchmaking expertise of Breguet’s masters of art, is nestled inside a titanium cage adjoining an anti-magnetic escapement. The combination of a silicon balance spring and anti-magnetic escapement protects the watch from environmental impacts and various shocks, thus contributing to its superior level of accuracy and precision. Thanks to a newly patented high-energy barrel, the watch provides around 90 hours of power reserve. Its balance ticks at a speed of 4Hz, which makes it more precise than most of the standard tourbillons that typically run at a balance frequency of 3Hz.

A platinum version of the Classique Grande Complication Tourbillon Extra-Plat Automatique boasts 42mm in diameter, which puts it in a category of large men’s watches. The polished case is embraced by a finely fluted case-band, and fused with elegant lugs with screw bars. Its dial is rendered in precious 18-karat gold, which is, in addition, silvered and engine turned in four alternating designs: clous de Paris hobnail, cross-hatching, barleycorn, and straight chevrons. Its deconstructed layout reveals off-centered elements: the hands, the hour chapter ring with Roman numerals, the power reserve indicator at 8:30 position, and the tourbillon at 5 o’clock.

The beautifully decorated movement can be admired through the sapphire crystal on the case-back. It reveals profound engravings on the plates, bridges, and barrel, the space-saving the platinum peripheral rotor, as well as the swarm of ruby-colored jewels.

Breguet Classique Tourbillon Extra-Plat Automatique 5377 in platinum is referenced as 5377PT/12/9WU, and it retails around 160,000 CHF. The watch is mounted on an elegant black alligator leather strap with a triple-blade folding clasp. It is also available in rose gold variant (reference 5377BR/12/9WU)